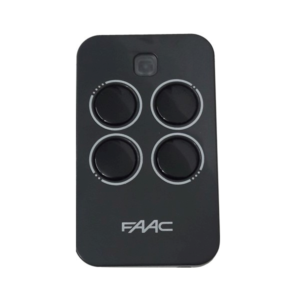 The XT4 433 RC is a transmitter designed for automatic vehicle and pedestrian entrance applications. 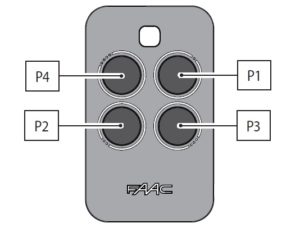 Enable learning on the receiver.

2. Time learning starts again: another TX can be stored on the same channel.

1. Press buttons P1 + P2 simultaneously on a TX already stored for 2 seconds, then release them; the LED flashes.

3. Repeat the procedure of storage on each button you want to use. 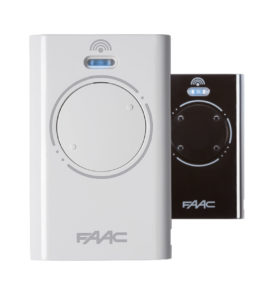 The XT 433 SLH LR is a transmitter designed for automatic vehicle and pedestrian entrance applications. 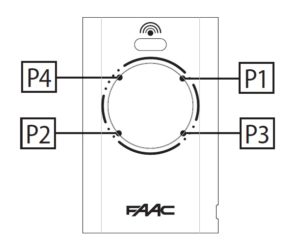 Memorising the first radio control on the receiver.

Carry out the procedure at a distance of at least half a metre from the receiver.

– Place the receiver in learning mode (RP/Decoder/Minidec: press and hold down the button on the board until it has been memorised, the LED flashes. Other models: refer to the specific instructions)

– Press and release the button to be memorised, check that it has been memorised on the receiver (RP/Decoder/Minidec: the LED lights up steadily for a couple of seconds. Other models: refer to the specific instructions)

3)  Take the receiver out of learning mode (RP/Decoder/Minidec: release the button. Other models: refer to the specific instructions)

Memorising the other radio controls.

1)  On the radio control that has already been memorised, press buttons P1 + P2 simultaneously, then release them, the LED flashes

2)  Within 8 seconds, press and hold the button that has already been memorised, the LED lights up with a steady light

3)  Bring the radio control that has already been memorised, into contact face to face with the new one to be memorised

5)  Release all the buttons

6)  Press the button that has just been memorised on the new radio control twice in succession.